Dandelion growing at the UMass Research Farm in Deerfield, MA. Note the stubs of previously cut leaves and the lush regrowth ready for a second harvest. (Photo by Ricardo Orellana)

Although it is best known today as a common and sometimes demanding weed in many regions of the world, dandelion has a long history of use in its areas of origin in Eurasia. All parts of the plant are edible and are used for both medicinal and culinary purposes. The roots and leaves can be dried and powdered for use medicinally, the flowers can be made into dandelion wine, and the leaves can be eaten fresh either in salad when they are young or cooked when older. The root can be roasted, ground and brewed as a coffee substitute.
Dandelion has a high concentration of Vitamins A and C as well as several minerals including iron. 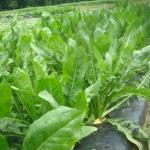 For leaf production, dandelion is often grown as a transplant and evenly spaced in rows. Transplanting causes the roots to spread instead of sending down a single large tap root, more energy is therefore put into leaf production. Even spacing also makes weeding easier.
For root production, it is best to direct sow dandelion in early spring. Roots are of their best quality and size at around 2 years of age.
To prevent the spread of this crop as a potentially noxious weed, clip the plants to the ground before flower heads open and disperse viable seeds. This can be done several times throughout a growing season to produce several flushes of harvestable leaves.

There are several horticultural varieties that can be purchased. Although many believe the common weed variety to have the best flavor and healthy quality. Seeds can be found in many seed supplier catalogues including Johnny’s Selected Seeds.

Dandelion has a high concentration of Vitamins A and C as well as several minerals including iron.