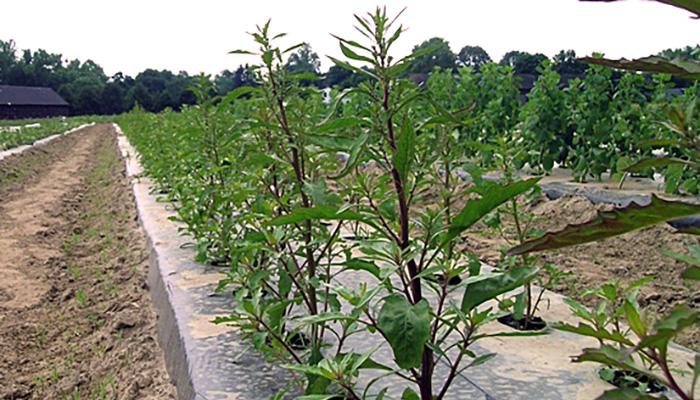 Epazote growing at the UMass Research Farm in Deerfield, Massachusetts in 2008

Epazote is an herb native to Mexico and used in many dishes in that country. It has a pungent flavor similar to liquorice and fennel, but stronger. It is commonly added to beans for flavor and also as an antiflatulent. Epazote is also used for medicinal purposes in many other countries in Latin America. In Brazil, where it is known as mastruz. or Erva-de-Santa-Maria, it is used for many different purposes, from healing scars to use as an insecticide.

This herb grows very well in our climate, and can be cut multiple times during the season and will re-grow. The Mexican population is growing in our state, but it is still a relatively small percentage of the Latino groups in our state, which are still dominated by Puerto Ricans, Dominicans, and a growing Central American population. These other Latino groups do not commonly use this herb in their cuisines; however, some do use it for medicinal purposes. An owner of a Mexican restaurant in Boston said that he can only get this herb dried since it is rarely available fresh. The shelf life of epazote is relatively short, based on preliminary work, which may limit its distribution.

In the Northeastern United States, it is best to start epazote in a greenhouse and transplant out into the field after the danger of frost.