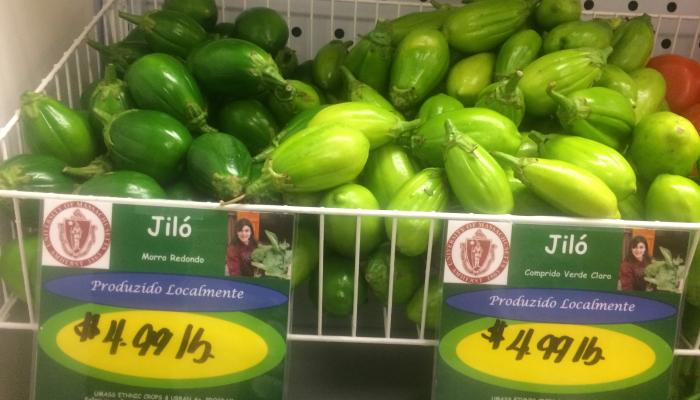 Jiló (Solanum gilo) is a type of eggplant popular in parts of Brazil. This plant is originally from Africa (Sękara, A. et. al. 2007) and was brought to Brazil with the slave trade. Jiló is also a staple in parts of Africa, where it is called garden egg in Eng ish and aubergine in French, among many other names in African languages. This Solanacious vegetable resembles “traditional” or European eggplant, Solanum melongena, in growth habit; however, the fruit of jiló is bitter and much smaller. The Brazilian market values jiló for its bitterness.

There are two basic types of jiló found in Brazil. One is called comprido verde claro (translating from Portuguese to "long, light green" in English - Figure 1) and the other is called morro redondo (translating from Portuguese to "round hill" in English - Figure 2). Morro Redondo is considered to be bitterer than comprido verde claro. The morro redondo type will also remain green, i.e. inmature and therefor marketable, longer than comprido verde claro types. Jiló starts out green and turns orange-red as it matures (Figure 3); Brazilians will traditionally not use jiló when it turns color. (In Massachusetts, African customers will buy both white and green garden egg/jiló that turns color as it matures.)

Jiló is popular mostly in Southeastern Brazil, including the states of Minas Gerais (Figure 4), Espírito Santo, Goiás and Bahia (Figure 5). It is also found in markets in Rio De Janeiro (Figure 6) and São Paulo. Massachusetts is estimated to have the largest Brazilian population in the United States and a large percentage of this population is from states in Southeastern Brazil, especially the state of Minas Gerais. In Minas Gerais, the jiló type preferred is comprido verde claro; however, one will also see some morro redondo in markets in this state. In some other parts of Brazil jiló is used only as bird food (Zoraia Barros, Personal Communication).

In some African countries there is a preference for green garden egg, i.e. jiló, in addition to white types (Figure 7). We have also identified popularity of jiló and garden egg among people from Bhutan and Burundi living in Massachusetts (Figure 8).

Jiló is used several ways in Brazilian cuisine, including as an ingredient in main dishes, soups, and fried. In Southeastern Brazil, it is common in bars and restaurants to snack onsautéed jiló and onions when drinking cachaça, the national drink of Brazil (This jiló and onion snack is called tira-gosto in Portuguese). Jiló and onions are considered a good alternative to other dishes that are traditionally used in bars, such as pork rinds (torresmo in Portuguese), sausages, and sardines, all of which are normally fried in oil. In rural areas of Brazil, where it is also known as jinjilo, jiló is an ingredient in a tonic used as a home remedy for influenza, colds, and fevers (Kurozawa, 2007). 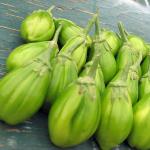 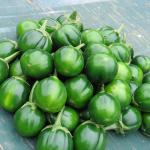 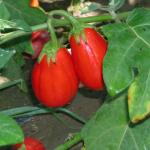 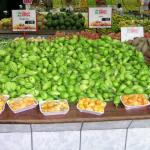 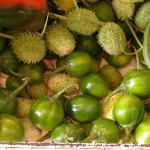 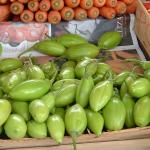 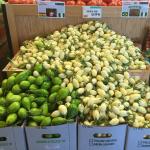 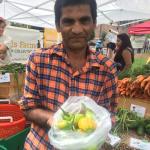 Transplants
Jiló transplants should be started earlier than traditional European eggplant varieties in order to maximize growth in the field. In New England, the recommendation is to start "traditional"/European eggplant varieties 6–8 weeks before transplanting (Table 17: Germination and Growth of Vegetable Transplants, New England Vegetable Management Guide See "eggplant"). For jiló grown in Massachusetts, the recommendation is to start seeds 9 – 10 weeks before transplanting (Figure 9). Some farmers in Massachusetts will start jiló more than 12 weeks before transplanting, using pots for individual plants instead of transplant trays. Jiló plants will get much bigger than traditional European eggplants; plant heights exceeding six feet have been seen in Massachusetts (Figure 10). Under optimum conditions jiló will be ready for harvest by late July (Figure 11).
There has been a market for jiló transplants in the United States where there are Brazilian communities. Many Brazilian immigrants to the United States come for rural, agricultural regions of Brazil and have experience and interest in growing as much of their own food as they can in their home gardens, especially products that are part of their cuisine. Farmers in Massachusetts produce transplants for sale directly to customers or to Brazilian markets (Figure 12, Figure 13).
Plant population
Because a jiló plant is much bigger than "traditional" European eggplants (S. melongena) grown in Massachusetts, it is recommended to plant jiló at a lower plant population per acre than S. melongena eggplant types. In 2005, a replicated variety was implemented at the UMass Research Farm in Deerfield Mass. to evaluate the yields of several eggplant varieties popular among immigrant groups. Among these were the two types of jiló: morro redondo and comprido verde claro. The plants were spaced at two feet the row with two rows of plants on black plastic spaced six feet on center, for a plant  population of 7,270 plant/A (Figure 14). The yield for morro redondo was 31,530 lbs./A and 31,500 lbs./A for comprido verde claro (Mendonca, R. et al, 2006). We now recommend lower plant populations for reasons stated above. With a jiló variety trial at the UMass Research Farm in 2014, the plant spacing was 1.5 feet in the row, with one row on degradable plastic set 6 feet on center for a plant population of 4,840/acre (Figure 14) (Figure 15).

https://worldcrops.org/sites/worldcrops.org/files/crops/production/IMG_8258.JPG Jiló should be harvested shortly before it matures; as stated above, Brazilians will not accept jiló that has turned color.

It is recommended to stake and trellis jiló due to the size of the plants (Figure 14, above) (Figure 16). Branches on plants not staked can break and reduce yields. 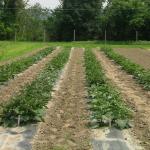 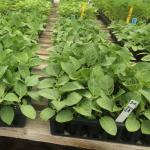 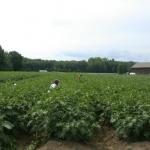 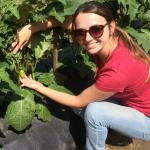 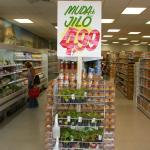 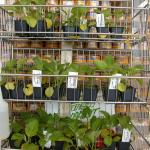 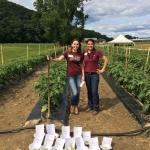 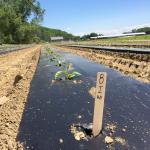 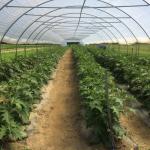 There have been multiple sources of jiló seed since we first started working with this crop in 2003, including two popular seed companies among commercial growers that carried jiló seed; however, these two larger companies no longer offer jiló as of 2013. There are other smaller seed companies that have offered jiló seed over the years; however, the cost per seed can be very high because it is usually sold in small amounts. In addition, some companies sell seed as ”jiló”, but it may not actually be authentic.

The best way to locate a seed company with jiló is to do a search online. You can try the following words in searchers:

2. “Solanum gilo” combined with “seed” (Solanum gilo is the genus and species of jiló)

You will most likely find “hits” with sites that have jiló seed for sale. You then want to make sure that the seed that a particular company has is in fact jiló. It is recommended to contact the seed company to get assurances that the plant is in fact jiló. If you are still not certain that the seed is in fact jiló, buy a small amount and grow it out on your farm or in a greenhouse. (If you have a heated greenhouse during the fall/winter months, you can start and grow-out several of the jiló seeds you bought to produce mature fruit instead of waiting to do so in the spring/summer months outside.) When you have marketable jiló fruit, find a Brazilin who uses jiló and ask them to confirm that is in fact jiló. (As described above, not all Brazilians eat jiló, so make sure you ask if they in fact know how jiló should taste). If it is authentic jiló, you want to let the fruit mature (i.e. turn red/orange) before saving seed. Seed from immature eggplants are not viable.

Note: It is illegal to bring seed, or any plant part, into the continental US without a permit from USDA, specifically APHIS. This is due to the concern of importing invasive species and/or plant diseases/insects that are not currently found in the United States. This means that you cannot buy seed, including jiló, from a company located outside of the United States.

In 2014, we evaluated hybrid and open-pollinated varieties of jiló from Brazil at the UMass Research Farm, some of which had higher yields than varieties being grown in Massachusetts. However, we have been unable to bring these varieties into the United States in volume for commercial production because of trade complications between our two countries. We are continuing to try and bring these jiló seeds to the US for production here.

Farmers who have jiló save seed from one season to the next, which is easy to do. So, once you find a source of authentic jiló make sure you save seed for the next season. UMass Amherst Amherst has produced videos to show the process of how to save seed from mature jiló  fruit. One video is in English and another is in Portuguese (português).

We pack jiló in 1/2 bushel waxed boxes, which will fit 16 lbs. of fruit (Figure 17). One reason not to use a larger box, commonly used with European eggplant types, is the high price for jiló. When jiló harvest begins in late July/early August in New England, the wholesale price can be as high as $35/1/2 bushel ($2.20/lbs.). At that price, a bushel 1/9 case, which is standard for European eggplant, would be over $70 and could create "sticker shock". 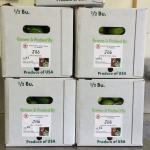 Jiló is very popular among Brazilians from certain regions of this country, as described above. Whenever growing a new crop, it is important to make sure that there is a viable market for it BEFORE planting.

In Massachusetts, harvest begins in mid-late July and the price is quite high with the first harvests, as much as $2.50/lbs. wholesale and $5.99/lbs. retail (Figure 18). The majority of jiló grown in Massachusetts is sold wholesale. Some growers do sell it at farmers’ markets (Figure 19).

In addition, there are many small Brazilian markets that carry small amounts of jiló and prefer smaller cases. In many instances these smaller cases are provided to these stores by “jobbers” who pick up the jiló at terminal wholesale markets, such as the New England Produce Market in Chelsea Mass. (Jobbers, formally known as “peddlers,” are small to medium size wholesale operations that buy products from larger wholesale operations and deliver them to retail businesses (Kaufman et al., 2000). One jobber company in Massachusetts is Brazilian-owned and has over 30 accounts in Massachusetts, mostly made up of restaurants and small stores (Mangan, et. al.)) 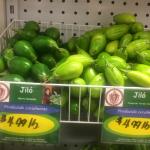 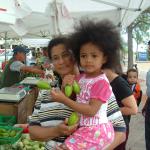 It is recommended to use promotional activities to market jiló using Brazilian and Portuguese-language media (Many Brazilians live in areas where there are Portuguese-Americans). Due to the large Brazilian populations in Massachusetts, Connecticut, New Jersey, and other regions in the Northeastern United States, there are multiple Brazilian media outlets that are interested in promoting activities of interest to their audience, such as crops grown in in the United States that are popular among Brazilians. These media outlets include: 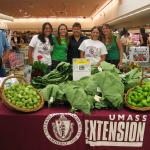 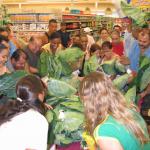