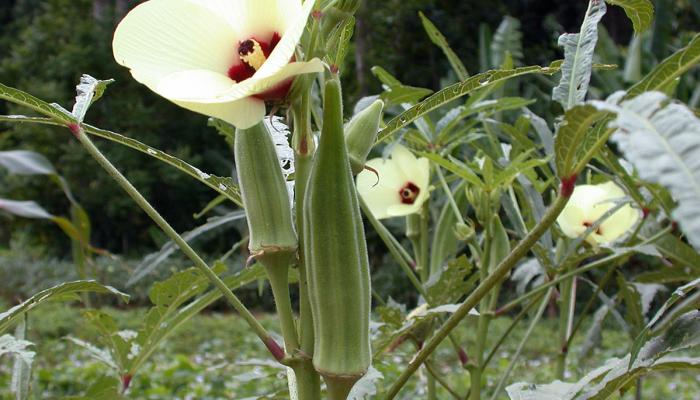 Okra on a farm in Pinar del Rio, Cuba. (Photo by Frank Mangan)

Okra is a warm-season crop called quiabo in Portuguese, quingombó in Spanish. It is originally from India and was cultivated by the Egyptians in the 12th century AD, and arrived in the US in the 18th century with the slave trade. It is also very popular in many parts of Brazil, among many other countries. It belongs to the hibiscus family (Malvaceae) and the plants can reach 3 to 7 feet tall, depending of the variety The flowers are 1.5-3.5 inches diameter, with five white to yellow petals, often with a red or purple spot at the base of each petal. The fruit is a capsule containing numerous white seeds.

The immature pods are used in soups, stir fries, and stews. Okra is an important part of of the cuisine in Sothern US. frango com quiabo (chicken with okra) is a Brazilian dish that is especially famous in the state of Minas Gerais, the state of origin of a very high percentage of Brazilians living in the US.

The mucilage in okra acts as a thickening agent in soups, such as gumbo, a popular soap in Cajun cuisnes. The Hibiscus like flowers and upright plant give okra an ornamental value.

In Brazil, okra is very popular throughout the country. The dominant variety (Santa Cruz 47) is a smooth type as opposed to the undulating type that predominates in the US. 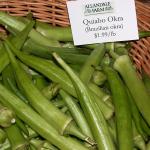 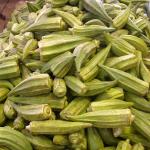 Okra does best in warm weather and will die with frost. Flowering will occur as soon as 45 days after seeding, depending on the variety, and pods are ready for harvest 4 to 5 days after flowering. As pod size increases, tenderness decreases. Most varieties will lose their tenderness, desired by the market, when they exceed 3 inches in length. For this reason okra plantings must be picked almost every other day.

It can be started from seed or as a transplant – it is recommended to grow from transplant in Massachusetts for early harvest. It should be grown for 4 – 6 weeks in the greenhouse before planting into the field. Most varieties have hairs on all parts of the plant that can cause skin irritation, so gloves and long sleeves are recommended for harvest.

In 2009, research on okra at UMass Research Farm is focusing on evaluating the most popular varieties and optimum densities and yields for our climate. Also farmers in Massachusetts are growing okra to estimate the market demand for this crop.

Refer to the New England Vegetable Management Guide and click on "Okra".

There are many commercial seed sources for okra.

Okra has a high respiration rate and is very sensitive to bruising and rapid desiccation, making wholesale marketing difficult. Okra should be cooled to 50 degrees Fahrenheit after harvest to maintain quality.