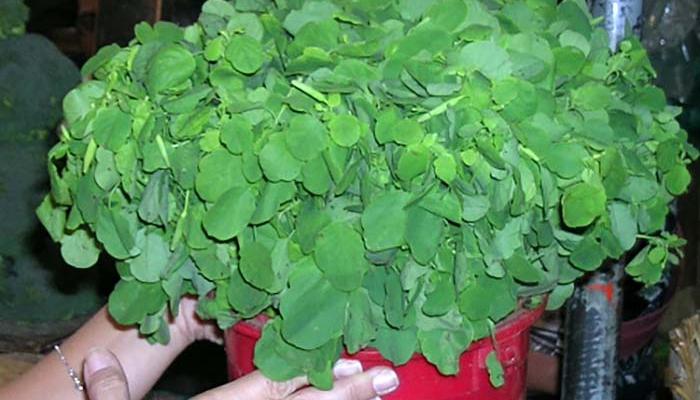 Pápalo for sale at a wholesale market in Mexico City in 2010. (Photo by Frank Mangan)

Pápalo, also known as pápaloquelite among other names, is an herb used in Mexican cooking that has a very strong and exotic aroma and flavor. It is similar to cilantro with a citrus-lemony flavor. It is most popular in Central Mexico and in particular the state of Puebla. People in other parts of Mexico may not be familiar with it.

There are two distinct types of pápalo, shown in a picture below, both of which have a similar aroma. One has supple leaves and the other is made up of thin stems. In a wholesale market in Puebla, vendor refereed to both of them as “pápalo”, but would call the one with stems “pápaloquelite” to differentiate from the type with supple leaves.

The most common species found for the type with supple leaves is Porophyllum ruderale; other species identified for these two types of pápalo are Porophyllum linaria, Porophyllum macrocephalum and Porophyllum tagetoides.

This herb is used fresh to flavor tacos and beans, among other dishes. In some Mexican restaurants, stems of the herb are left in vases on the table and customers will take leaves to put on certain dishes.

In Puebla it is used in several dishes, including as a seasoning in cemitas, a sandwich that is very popular in this state. You can find this sandwich being made on the streets of Los Angeles and New York, and other US cities with Mexican food vendors.

Two seed sources of the type with supple leaves herb were evaluated at the UMass Research Farm. The plants were very productive and were cut several times and would continue to produce marketable leaves. It is extremely frost sensitive, and began to show chilling injury on the leaves when night temperatures fell below 40° F. 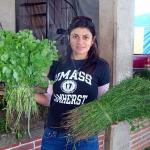 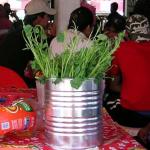 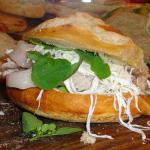 In the Northeastern United States, it is best to start pápalo in a greenhouse and transplant out into the field after the danger of frost. Start the transplants 6-8 weeks before putting out in the field.

No pests were observed causing damage on this crop in trials at UMass. 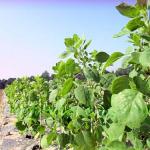 Seeds can be purchased at "Terrroir Seeds, Richters and Johnny’s Selected Seeds