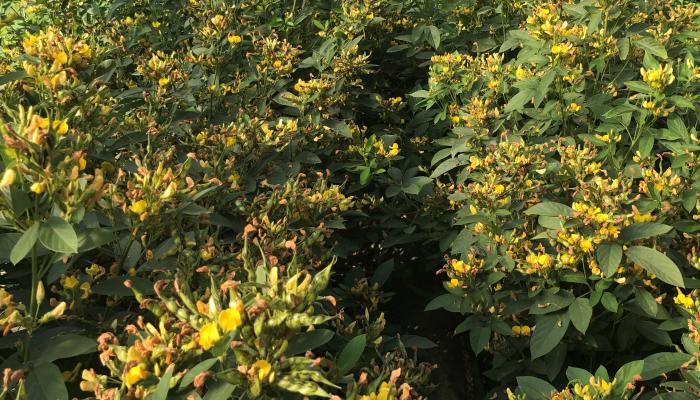 Pigeon peas growing in a high tunnel at the UMass Research Farm in Deerfield Mass. on August 25, 2017 (Photo by Frank Mangan).
Author(s):

Pigen peas are found in markets serving Puerto Rican communities in Massachusetts in three forms: canned (Figure 2), frozen (Figure 3) and "fresh" (Figure 4). Markets and consumers in Massachusetts will call the gandules for sale in Figure 4 "fresh", but in fact they are harvested fresh in the Dominican Republic, but then frozen and shipped to the United States where they are thawed and put out for sale as fresh (Zoraia Barros, Personal Communication, 2017). One can find fresh pigeon peas for sale, and grown, in Puerto Rico (Figure 5). 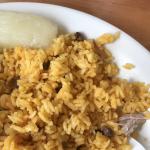 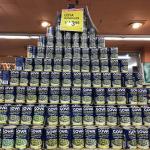 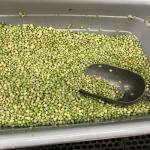 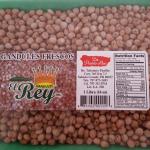 Pigeon peas are a shrub that grows from one to a few meters tall and up to two meters wide, unless special short-season varieties are chosen. Most types flower when the days are 11 to 11 1/2 hours long, but varieties responding to both shorter and longer day lengths are available, and some will flower at any time of the year. Usually flowering begins in 120-150 days after seeding and maturity of seeds can after about 250 days. Advantages of pigeon pea production is that they grow well in poor soils and dry conditions, are a nutritious and high-protein pulse crop and they can be used for animal field and as a cover crop.

In Massachusetts, pigeon peas have to be started as transplants in order to produce marketable fruit before frost (Figure 5). The transplants can be transplanted into the field after the danger of frost. In a high tunnel at the UMass Research Farm in Deerfield Mass, pigeon pea transplants were put into the ground on May 31, 2017 at the row spacing of 1’ in the row. There were two rows of pigeon peas spaced one foot apart on degradable plastic mulch (Figure 6). The plastic mulch was spaced 5’ 6 inches on center for a total population of 15,700 plants/acre (Figure 7). 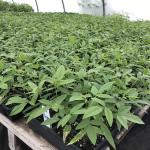 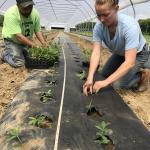 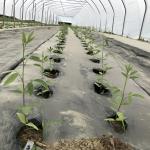 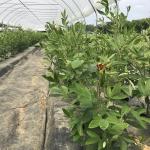 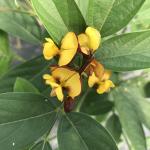 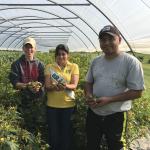 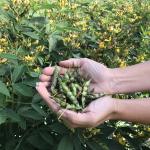 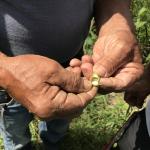