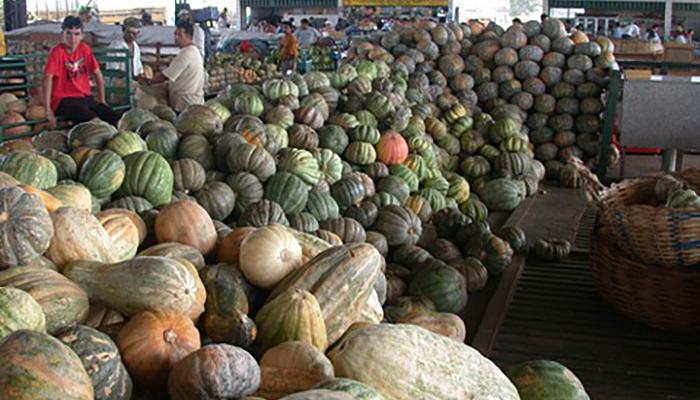 Abóbora at the Terminal Market in Fortaleza, Brazil. (Photo by Frank Mangan)

Abóbora (Cucurbita spp.) is the generic name for pumpkin or winter squash in Portuguese. In Brazil, abóbora is a popular crop throughout the country. There are several varieties, as can be seen by the tremendous diversity in the above picture from a terminal market in Fortaleza (Northeastern Brazil). Brazilians will refer to all these different types as “abóbora”, similar to the way consumers in the United States will refer to different varieties such as “Howden”, “Racer”, and “Tom Fox” all as “pumpkin”.

Most of the popular abóbora varieties produced in Brazil are Cucurbita moschata. These include the following varieties (with the corresponding letter from Figure 1: abóbora seca (A), abóbora baiana (B), and míni paulista (C). There is one popular variety, abóbora moranga exposícão (D), which is C. maxima. Currently most Brazilian markets in Massachusetts carry calabaza (E), which is Cucurbita moschata
and is popular among the large Puerto Rican and Dominican communities and is therefore more accessible.

As is the case with many crops in Brazil, there are tremendous regional differences. For example, abobora moranga exposícão is very popular in parts of the southern Brazil, but was not present at a terminal market in the Northeast. 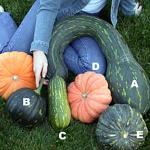 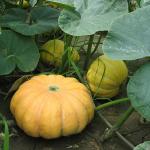 Production of abóbora will be the same as for winter squash and pumpkin. Refer to New England Vegetable Management Guide and click on "pumpkin and squash”.

All the varities shown in Figure 1 were grown in Massachusetts with seed from a company in Brazil (Agristar). These seeds can be special ordered through Johnny's Selected Seeds 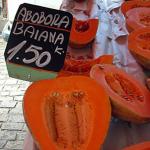