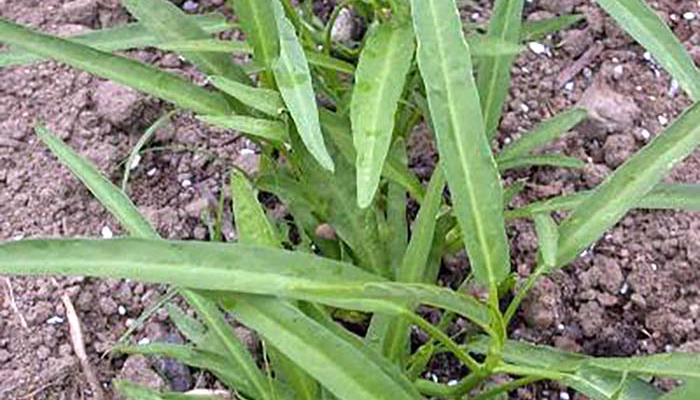 Water Spinach (Ipomoea aquatica) is a member of the Convolvulaceae (Morning glory) family and the same genus as the sweet potato (Ipomoea batatas). Water spinach is an herbaceous aquatic or semi-aquatic perennial plant of the tropics and subtropics. It has a creeping growth habit but may grow erect in water. There are two major cultivars of water spinach. Ching Quat, also known as “green stem” water spinach, has narrow leaves and white flowers and is usually grown in moist soils. Pak Quat, also known as “white stem” water spinach, has arrow-shaped leaves and pink flowers and is grown in aquatic conditions, similar to rice.

Ipomoea aquatica is a federal noxious weed in the United States. Under authority of the Federal Noxious Weed Act, the USDA Animal and Plant Health Inspection Service (APHIS) prohibits the importation and interstate movement of this species, except under a USDA-issued noxious weed permit. Water spinach is on the federal noxious weed list because it becomes an established weed in fresh water-ways in tropical climates. It has become an established weed in several southern states in the United States.

The UMass Extension Vegetable Team has worked with federal and state regulators to create a permitting system for the legal growth and sale of water spinach in Massachusetts. Since water spinach is extremely sensitive to frost, it does not pose a threat to water systems in Massachusetts. To find out about growing this crop legally in the United States, contact the APHIS web site for more information.

Water spinach is a frost sensitive plant. Optimal temperatures for growth are between 75° and 85° F and chilling injury can occur below 50° F. The cultivar Ching Quat is grown in moist soils, often in beds. Direct seed or transplants may be used. Many Asian growers in Massachusetts will soak the seed until germination to ensure the seed is viable. Growers plant in beds with 6 – 10 seeds per foot in rows that are 6 – 8 inches wide. Plant stems are not strong, but plants grown in beds support each other and produce longer stems with less branching, which is what the market prefers.

Water spinach needs much more water than most other vegetable crops. This increased irrigation can leach out readily available nutrients, so it is recommended to use slow-release forms of fertility. Harvest of the entire plant can be made 50 to 60 days after planting. Plants are harvested by cutting the stem close to the ground and then nitrogen is applied to encourage re-growth. Shoots regrow readily and in Massachusetts, growers will get two to three cuttings of water spinach before frost. The cultivar Pak Quat requires the same aquatic environment as paddy rice, meaning it can’t be grown viably in New England.

Tarnished plant bug adults (Lygus rugulipennis) feed on the succulent tissue where new leaves are developing in the leaf internodes. They pierce the tissue and inject a toxin into cells, which causes death of cell tissues, prevents the new leaves from developing, or causes distortion of the emerging leaf as it unfolds. A blackened, dead area at the growing tip is evidence of their feeding.
Tarnished plant bugs also cause holes in the leaves which enlarge with the leaf, often in a somewhat symmetrical pattern on the two halves of the leaf. Damage to the growing tip stops the elongation of the plants and stimulates more branching below. Since the markets prefer a longer-stemmed plant, this effect reduces marketability and delays harvest. Holes in the leaves also reduce the marketability of the greens.

Management of tarnished plant bug should begin with reducing favorable habitat surrounding the production area, including eliminating fallow, weedy areas. Use of row covers can exclude tarnished plant bugs. Insecticide registrations on this crop are limited since it is a noxious weed. Insecticides used should include only materials that have a broad label for all leafy green crops, such as neem.

Other leaf-feeding insects include the golden tortoise beetle (Metriona bicolor) which may be seen as adults which can change from shiny gold-colored to dull rust colored, or the larvae, which have the habit of piling frass on their backs. The spotted cucumber beetle (Diabrotica undecimpunctata howardi) may also be present. Both of these beetles cause chewing injury to leaves, but rarely reach numbers high enough to cause significant damage. Where natural enemies are excluded or with excessively high nitrogen levels, outbreaks of green peach aphid (Mysus persicae) can occur. High numbers of aphids cause leaves to curl. Insecticidal soap used at weekly intervals can reduce infestations. Normally, beneficial insects keep aphid populations below damaging levels.

Since water spinach is not nationally recognized as a legal food crop there are no pesticides specifically labeled for it. It is important not to use pesticides that are not labeled for the crop.
Two critical reasons for this are:

However, it would be legal to use pesticides that are labeled for the entire leafy vegetable crop group. The specific target pest does not have to be listed on the label but the leafy greens crop group must be on the label. Pay special attention to label restrictions regarding the days to harvest interval. In Massachusetts, there are general use insecticide products with the following active ingredients that are labeled for use on leafy vegetables; spinosad, neem, Beauvaria bassiana, and permethrin (dilute products with 0.25% active ingredient; please note that some permethrin products are restricted or do not have the leafy green crop group on the label). Water spinach requires rapid and careful post-harvest handling to maintain quality. Once harvested, shoot tips and leaves easily wilt. Cool in 50°F as soon as possible after harvest, and maintain high relative humidity with good ventilation. Produce should be used soon after harvest to minimize quality loss. 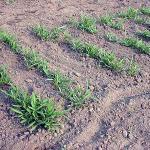 In order to buy this seed, the grower MUST have a valid permit from APHIS to grow this crop (see above) AND buy the seed from a company that has a valid permit to sell the seed. At the time that this facts sheet was produced, only one seed company in the United States had been identified with a valid permit: